Although the NERC Arctic Station has not yet opened for the season, it was fantastic to be able to support a science team in Ny-Alesund earlier this year. Margaret Cramm, a PhD student at Queen Mary University of London, was part of the AMP’d Project who visited in March 2021. She explains what their research is all about and how they travelled and worked in unusual times for Arctic scientists.

The Arctic is warming faster than other areas of Earth. For scientists studying climate change in the Arctic, fieldwork is important for observing and studying how Arctic warming is affecting environmental systems. This past month, I participated in an expedition to Svalbard supported by the US Department of Energy, British Antarctic Survey and Norwegian Polar Institute.

The project, led by Dr. Karen Lloyd and Dr. Tatiana Vishnivetskaya of the University of Tennessee, is called Arctic Microbial Permafrost Degradation (or AMP’d, for short). Our goal is to identify the activity of microbes in permafrost as it thaws due to climate warming. Permafrost contains large amounts of trapped organic matter. When it thaws this organic matter gets decomposed by microbes and fuels the microbial production of greenhouse gases like carbon dioxide and methane. Understanding the microbial contribution to greenhouse gas emissions from thawing permafrost can help climate modellers better predict future climate warming. At present, microbial activity in Svalbard permafrost is not well understood. With this project we aim to understand how microbial communities in Svalbard will respond to permafrost thaw and climate warming.

Our first stop in Svalbard was in Longyearbyen, the population centre of Svalbard. From there we took the MS Farm, a small charter boat, on a 14-hour journey to Ny-Ålesund, the small research town that served as our fieldwork base. Our route from Longyearbyen to Ny-Ålesund took us through the sound of Forlandsundet separating Prins Karls Forland and the west side of Spitsbergen. The boat slowly carved a path through the sea ice and allowed us to see some spectacular views of mountains and ice on our journey to Ny-Ålesund.

When we arrived in Ny-Ålesund our first task was to find the fieldwork gear, assemble the drill, and set up the lab where we would prepare permafrost samples for microbiological analyses. We divided into a “drilling team” and a “lab team” with the drilling team focused on finding suitable areas near Ny-Ålesund for drilling permafrost, and the lab team focused on sectioning permafrost cores and preparing them for future microbiological analyses in our home laboratories.

Contamination is a central challenge for drilling any material for microbiology investigations, including permafrost. Often fluids are used to support the drilling process but using drilling fluids can contaminate permafrost with foreign microbes. Since our investigations focused on in situ microbes, avoiding contamination was essential. Avoiding contamination is particularly important when the abundance of microbes in the permafrost is low, which preliminary investigations of the microbiology of this area suggest. Contamination may obscure real microbial signals. Our drill did not use drilling fluids, and because of this, friction between the drill barrel (the rotating cylinder at the end of the drill that cut out permafrost core sections) and the surrounding permafrost created heat that could melt the permafrost. Preventing the core material from getting too warm during drilling was therefore also important.

Permafrost core sections were removed from the earth in ~30 cm intervals in core liners that held together the structure of the permafrost. Varying with depth, the permafrost material was dry, loose, and sandy, and sometimes it was hard and consolidated like rock. Coloured layers could be seen at different depths of the core from the same borehole hinting that different layers have different geochemistry and different in situ microbial metabolisms. In the lab, we separated each core section into smaller sections so that specific permafrost layers could be analyzed for microbiology and biogeochemistry. The cores from each of these were stored frozen and transported to laboratories in London, Naples, New Jersey, and Knoxville, for experiments and analyses that will soon help us understand how microbes in Svalbard permafrost are affected by and participate in Arctic warming. 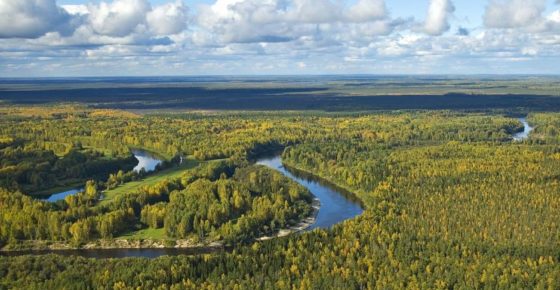