Recording: If you missed the event, you can view the recording which is now available.

We are excited to invite you to a webinar with the Open Ocean Project of the Association Maritime Heritage. This is a unique opportunity to learn about the Project’s activities and discover their scientific work carried out in the far-flung corners of the Russian Arctic: the coastal areas and remote islands in the Barents Sea, the Kara Sea and the Laptev Sea.

Set up in 2014, the Open Ocean Project has focused on scientific and practical expedition activities of the Association Maritime Heritage. In 2015-2019, the project carried out 13 multidisciplinary expeditions under the brand Open Ocean: Arctic Archipelagos (O2A2). The Project is also involved in outreach activities: these include photo exhibitions and public talks as well as presentations for students. The Open Ocean Project is collaborating with partners across Russia and internationally.

In 2017, the expedition O2A2-2017 discovered the Eira shipwreck in the Franz-Josef Land waters. Eira belonged to British polar explorer Benjamin Leigh Smith who made an important contribution to the discovery and early exploration of the archipelago in 1880–1882. During the 2018 expedition, some 40 artefacts from Eira were collected and brought to the surface. They now form part of the Museum of the World Ocean collection in Kaliningrad, Russia. 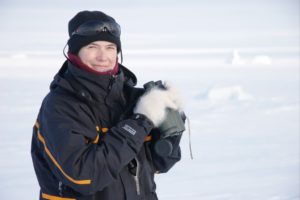 Dr Maria Gavrilo graduated from the Biology Faculty of Saint Petersburg State University in 1984. Maria majored in ornithology and ecology in the polar regions, mostly in the marine Arctic. Maria has extensive field experience, having participated in more than 50 polar expeditions as a scientist and scientific leader. During her research work in the Arctic and Antarctic Research Institute and the National Park Russian Arctic she accumulated a vast amount of material on the contemporary state of seabird and marine mammal populations, and environment in the polar regions, human impact on marine ecosystems.

In 2014, Maria established a project called Open Ocean aimed at the study and conservation of the marine heritage in the remote Arctic coastal areas. By now, 13 expeditions have been carried out under the brand Open Ocean: Arctic Archipelagos (O2A2) in the Barents and Kara Seas. During the 2017 – 2018 seasons, the expeditions O2A2 discovered and made archaeological survey of the Eira shipwreck, the research vessel (1880–1881) that belonged to largely forgotten British polar explorer Benjamin Leigh Smith. 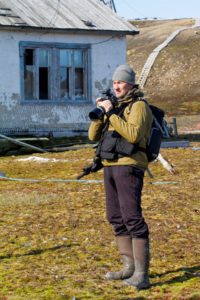 Vladimir is a photographer and traveler with experience of about a hundred countries across the world. His favorite photography aspect is taking pictures of people in remote and inaccessible locations, ethnographic portraits and unexplored landscapes in the middle of nowhere. He has experience of supporting scientific expeditions in the high Arctic (Franz Josef Land, Novaya Zemlya, Severnaya Zemlya archipelagos). Vladimir is a keen researcher of the Arctic exploration history. His role in the expeditions involves coordination of safety activities, including to protect polar bears and people from each other, and assisting scientists in the field.

The aim of the Open Ocean Project is to contribute to the formation of a marine ecological culture and the maintenance of Russia’s maritime traditions through the knowledge and conservation of the natural and historical values of the Ocean as the cradle of humanity and the main resource of its existence. The Project was created in 2014 to join scientific and practical expedition activities of the Association Maritime Heritage: Sustain and Explore (AMH).

The AMH is an NGO established in 2009 in St. Petersburg that unites natural and legal persons engaged in the study, conservation and promotion of maritime heritage. The founders of the Association are 34 legal entities, including such leading federal institutions as the Museum of the World Ocean, the Northern (Arctic) Federal University, Makarov State University of Marine and Riverine Fleet, St. Petersburg Marine Technical College and others. There are several Commissions in the AMH working in different fields related to maritime heritage such as maritime museums & archives, ship modelling, maritime history, education & outreach. Work in the field of nature conservation, study and promotion of natural heritage is coordinated by the Commission on Natural Heritage and Specially Protected Natural Areas.

In 2015-2019, the project carried out 13 expeditions under the brand Open Ocean: Arctic Archipelagos (O2A2). Coastal areas and remote islands of the Barents, Kara and Laptev seas were explored using boat, research vessel, helicopters as well as on foot, but most of the expeditions are based on SY Alter Ego belonging to the project.

Since 2014, the Association is a partner of the Russian-Norwegian environmental cooperation in the Barents Sea Region and is involved in biodiversity and marine environment projects. Since 2015, the O2A2 expedition team has been participating in the large-scale SEATRACK programme aiming at tracking seabirds at sea in North Atlantic.

In 2017, the expedition O2A2-2017 discovered the Eira shipwreck in the Franz-Josef Land waters, 80N. Eira, the ice-going wooden axillary steamer barque belonged to largely forgotten British polar explorer Benjamin Leigh Smith who pioneered exploration of the recently discovered Franz-Josef Land archipelago in 1880–1882. In 2018, the Open Ocean project team made the first-ever underwater archaeological survey in the Russian Arctic, while the Eira appeared to be the world’s northernmost discovered shipwreck.

The helicopter expedition O2A2-2019: Ivory Gull was carried out as part of a pan-Arctic survey under the auspices of the Arctic Council’s CAFF Programme. The aerial expedition surveyed key nesting areas of the vulnerable Red-listed ivory gull population in the Russian Arctic.